St Giles’ Church dates from the 15th century and is a Grade 1 listed building.   The Church tower is 91½ feet high, notable for its decorations and houses 6 bells dating from 1757, together with a faceless clock. 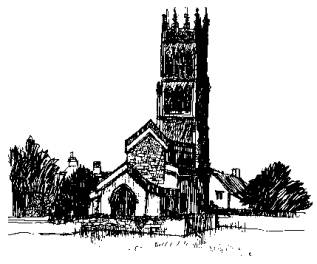 The style and construction of the clock suggest manufacture in the 18th century, possibly when the bells were cast, and it is housed in a room between the ringing chamber and the bell chamber.  There is no dial, either external or internal, the sole indication of time being given by striking the hours on the tenor bell, which weighs approximately 12 cwt, cast by Thomas Bilbie in Chew Stoke.

It is believed that the clock ceased working at the beginning of the Second World War, but during the 1980’s it was repaired and kept running for a year or so, requiring daily winding.

The clock has two trains of gears, one for going and one for striking.  The clock frame is of wrought iron strip, often known as ‘birdcage’ in shape.  It is too large to be taken out of the tower down the spiral staircase, which is the 15route which would have to be employed, as the clock room floor and ringing chamber floor do not have the traditional trapdoors.  The clock is mounted on a wooden trestle and housed in a wooden ‘clockhouse’ sited against the east wall of the clock room. 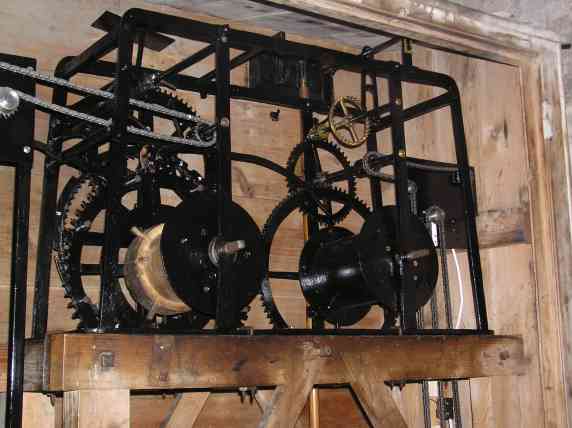 Each of the gear trains has three shafts (known to clockmakers as ‘arbors’), the lowest arbor in each train carrying a rope drum for ropes to the original large weights and, in the going train, the top-most carrying the escapement wheel, released one pin at a time by the pallets, controlled by the pendulum.  The latter has a wooden shaft (little affected by temperature) and a bob of about 25kg (56lb), producing an overall length of about 2m (6  ft 6ins).

In the strike train, the middle arbor carries a ‘hoop’ wheel which revolves once for each blow of the hour and the top-most arbor carries a ‘fly’ or air-brake which prevents the train running too fast and produces a pleasant speed of striking.

Engineering Consultant Dr Marcus Barton of Leigh on Mendip was contracted to restore the clock and install electric winding to avoid the onerous task of daily climbing 70 spiral steps to wind up the mechanism.  Night silencing was also planned to allow chiming only during the daytime.  An Archdeacon’s faculty was obtained giving permission for the restoration of the clock to be carried out.

Work completed included dismantling, cleaning and painting of the clock frame, cleaning excessive amounts of grease from everything, replacing several bushes, shortening the crutch, making and fitting parts to make the pendulum safer and replacing the wire to the clock hammer.  In addition Dr Barton  fitted a linear actuator which achieved night silencing by pulling the clock hammer away from the bell at night (or during bell ringing), removed the previous weights and weight ropes, refitted the doors to the clock house and designed, constructed and installed two motorised winders and a control unit.  The clock room was also thoroughly cleaned.

The clock remains weight driven, but now the weights are much smaller than originally and the force from the weights is applied by roller chain to the second arbor in each train, the weights being wound up by small electric motors which are controlled automatically.

The Leigh on Mendip Millennium Committee

was formed in 1998 at the instigation of the Parish Council, to organise events to celebrate the Millennium and to organise fundraising for a number of projects within the village.  The views of all inhabitants were canvassed in order to decide on the various proposed projects.  Projects completed were diverse – a carved stone Millennium bench, snowdrop planting around the village and a Doomsday book of villagers’ thoughts and activities on St Giles’ Day 2000.

The final project was to organise funding for the restoration of the faceless church clock.  The committee had some funds remaining from earlier fund raising and a number of donations had been given specifically for the clock restoration.  Once further grants had been obtained the restoration project could begin.

Grateful thanks for funding to

The Evergreen Group of Leigh on Mendip when it closed

The Longley family following a village walk in memory of Paul

Dr Marcus Barton for the 2004/5 restoration

Judy Wall for the illustration of the church

Ron Sexty of Warminster, who made a new escape wheel and gave other help and advice

The clock is currently maintained by Chris Cudmore and may be viewed by appointment.